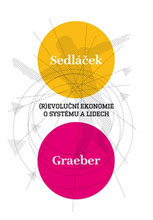 (R)EVOLUTIONARY ECONOMY: Of systems and men

In (R)evolutionary Economy publicist Roman Chlupatý’s finds himself in a trialogue with two original thinkers – economist Tomáš Sedláček and anthropologist David Graeber. Their focus is on the dominant economic and political framework or rather its failings. The trio tackles the very foundation of the current order and thus also the question that has repeatedly been raised as a result of the ongoing economic crisis: Can capitalism (in its current form) be reformed or should we brace ourselves for a regime change?

Sedláček, a former advisor to Czech President Václav Havel and the author of award-winning book Economics of Good and Evil, is a proponent of the reformist path. While many things need to change, the collapse of the current system would cause dangerous chaos, he says. Graeber, a professor at the London School of Economics and one of the prominent figures of the Occupy Movement, agrees with the premise that a lot needs to be done – and often starts his analysis with the same critique as Sedláček. However, he concludes that the crisis indicates that capitalism has run its course and that we need to start experimenting with what might replace it.

The discussion is thus an intellectual battle waged with fair and transparent tools. Among these are references to pop culture icons and everyday occurrences as well as citations of well-respected economists, philosophers and political scientists. As such, (R)evolutionary Economy entertains while at the same time inspiring critical engagement with the network of written and unwritten rules that surround us and make us homo economicus and homo politicus; it is a signpost indicating the possible directions that can be taken from the intersection at which we have arrived.

(R)evolutionary Economy is a loose sequel to Dusk Falls upon Homo Economicus – Roman Chlupatý’s previous trialogue with Tomáš Sedláček and Canadian mathematician David Orrell. Dusk Falls upon Homo Economicus has been published in four languages and its sales topped 25,000 copies in the first 18 months after its release. Both books are part of the Double series, which aims to tackle current issues using a light but informative discussion format with thought-provoking minds.